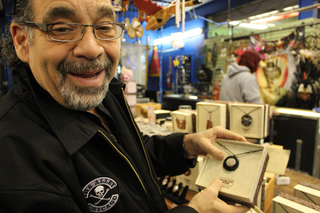 LAKEVIEW — Skulls, spikes, studs and skeletons have filled Mark Thomas's counterculture stores for more than 30 years. Now, the 58-year-old business owner wants to add another word to his vocabulary: "high-end."

Thomas owns four stores at the corner of Belmont and Clark, and his flagship The Alley, 3228 N. Clark St., has embodied the same culture since the 1970s: punk rock, goth and rock and roll. Most of the customers are young and want an affordable way to dress with an edge, he said.

But Thomas describes his new jewelry line Marché Noir Organics, a name meaning "black market," differently—sustainable, high-end, artistic. And the customer? A professional woman who might shop at Nordstrom's or designer boutiques.

"It's not Mark from The Alley," Thomas said. "It's my artistic side."

Marché Noir Organics jewelry, designed by Thomas and in-house designer Sher Dionisio, is made of ingredients like animal bone, stone, and wood. They're hand-carved in Bali, Indonesia, a place Thomas fell in love with when he started visiting in the late '90s with his wife of 25 years, Adrian.

Adrian, 46, loved the hand-carved jewelry for gauged ears Thomas would buy for The Alley in Bali, but she didn't want to put big holes in her own ears, Thomas said. That, along with a desire to build a sustainable product, inspired Thomas to create the line.

"Everything I do doesn't have to be black or a skull," Thomas said. "[I want] to prove that I can get out of my comfort zone."

The line features pendant necklaces, cufflinks and dog tags, and a percentage of profits will be donated to a monkey sanctuary in Bali.

Though prototypes of Marché Noir Organics are currently being sold in Architectural Revolution, 3226 N. Clark St., Thomas will not be selling in the stores. A higher price point of $50 to $100 won't work for his customers, he said. Instead, the jewelry will be online, at trade shows and in boutiques. 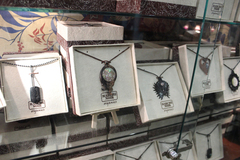 The online store will kick off at the beginning of February, and the jewelry will be ready in time for Valentine's Day, he said.

Thomas maintains his punk look with a leather "Alley" jacket and a large skull ring. But he insists Marché Noir Organics will illustrate another side of him, proving to the same haters that said he couldn't stay married that he can be upscale.

"If I fail, I fail," he said. "I wanted to do something different."