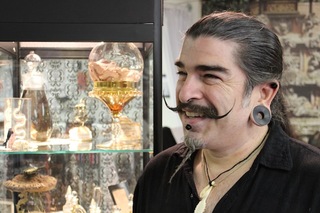 LAKEVIEW — Dead tarantulas in antique perfume bottles and snake skeletons enshrined in glass may sound pretty disturbing to some people.

But to Art Scott, a preserved bat in a glass jar appears normal and natural — not to mention beautiful enough to display on a fireplace.

"I don't get what's disgusting about it," he said. "What could be more adorable than a mouse with wings?"

Scott has been preserving dead animals since he was a kid, and at 46, he's discovered he's not the only one who appreciates the elegance of a squid in a jar. He's even been filmed for the upcoming fourth season of "Oddities," a Science Channel show about one-of-a-kind and bizarre artifacts.

The suburban Des Plaines resident started selling his creations last year on Etsy as The Curioddities Cabin. Now, the specimens are for sale at The Alley, located 858 W. Belmont Ave., where Scott works as a piercer.

He's sold three to five specimens a week since he started, he said — about 80 percent of them to women, a customer base that has surprised Scott.

"I never, ever, ever had any idea," he said of interest in the specimens from females. "Where were you when I was in high school?"

While the mustachioed man now publicly embraces his love for animals — which he said all died naturally — the hobby did not settle well with his peers when he was growing up in Huntington Beach, Calif.

Scott, forgoing sports or cars, instead spent free time in tide pools examining animals, alive and dead. He read books on preservation and ended up with dozens of preserved fish, lizards and scorpions. Many of them were former pets that he couldn't bear to get rid of.

"I didn't want to flush them," he said. "They were my pet! ...I assumed every kid did that with his pet fish."

After graduating high school, he gave them all away before moving to Los Angeles to sing for a band called Black Tegu, which had a sound he described as a combination of heavy metal and Mexican mariachi.

He was planning to go to college to study animals but instead sang in Black Tegu and worked for the reptile wholesale company LA Reptile. The band eventually broke up, and he fell in love with a girl in Chicago. He then decided to take the leap and move.

Scott didn't stay with the girl, but he remained in the area and turned his hobby into a business. His three kids love the animals — his 4-year-old son asked for a squid in a jar for Christmas — and gone are the days of putting dead fish in pickle jars.

He now attends estate sales to find ornate, antique containers for the preserved animals. It's all about displaying the beauty of the beast, he said.

"There should be some romance behind it," he said. "If the animal is presented in a very beautiful form, then that stereotype of 'Oh, gross, it's a dead snake,' maybe that can get eroded away."

Scott's creations are for sale on Etsy and at The Alley.